Here's my experience with getting inked in Singapore.

Singapore Travels: Getting Inked In Singapore.

Last year I wrote about, and uploaded the vector(s) for the tattoo I wanted to get inked on my arm, while I was in Singapore; I did not write much anything about where, how, and what. This post can be considered as the third follow up to the last two.

Consider it as an incentive or something else, but I like to now get tattooed wherever I travel to for the first time. What I mean is this: Want a new tattoo? Then travel somewhere new. Want to travel somewhere new? Get a tattoo too! That’s how I think now, and, so far so good. 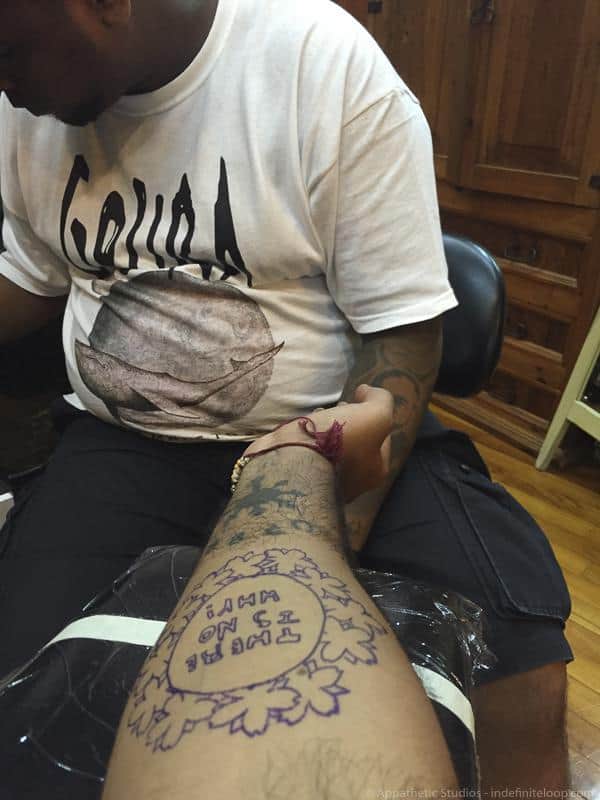 It was my virgin trip to Singapore, and getting a tattoo there followed suit. This led to a lot of research on my end, before I boarded the plane. I had shortlisted two parlors there, and narrowed it down further to one: Familiar Strangers Tattoo Studio , Singapore.

The day we landed in Singapore, I decided to text Familiar Strangers (SMS/Whatsapp no. +65 97604147). Glenn replied after about a couple of hours, inviting me to come visit the studio, and discuss the design I wanted to get done. We set the meet for the third day of my visit there. Though, I got so excited that I landed up finding myself walking to where their studio is located (Riverwalk) a day before our scheduled appointment, only to turn back, and keep walking elsewhere. It was fun, at the least I wouldn’t have to hunt for their address tomorrow or so I had thought, and ended up taking a taxi (rare occasions that, hailing a taxi in Singapore) the next day, not wanting to get late.

Getting tattooed in Singapore.

I ended up speaking with Glenn, not knowing he was Glenn. Yea, I am kinda daft that way. We (I was there with a friend), spoke with him first about the design I wanted. I was carrying a print out with me, and had the design on email too, just in case. Glenn was busy, and asked us to wait for Chris, who was tattooing some other patrons. We humbly obliged.

Soon the wait was over, and I showed what I had in hand as the design, to Chris. The lines were too much for a tattoo, as I had assumed. And, we settled on removing the lines, and replacing them with cherry blossoms instead. You can read about the design, here, and here. Once the design, and price were decided upon, the appointment for the tattoo was given for the following day. 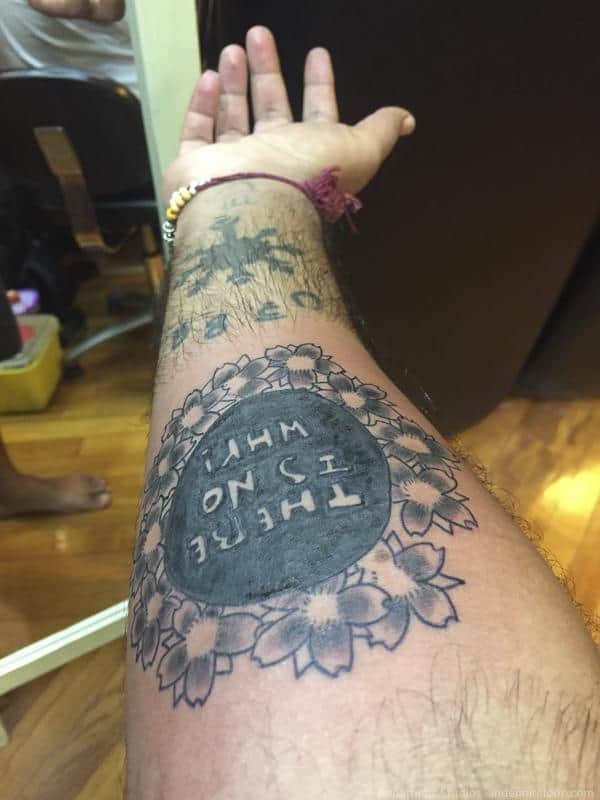 Come the next day evening, at 6PM, I found myself waiting at Familiar Strangers. Chris was busy with a pair of walk-ins, who had walked in just after I had come into the studio. A husband, and wife, who had wanted to get tattooed together. Chris asked me if I could wait. I had nowhere else to be, and looking at the couple looking back at me with pleading eyes, I gave in. After a bit of chit-chat, the wait was over. It was time to get inked.

Yes, maybe he’s one of the Corleone crew; we’ll never know for sure though. Coming back to the point, Chris was simply exceptional. I know, I know… I have a bad habit of calling every tattoo artist I meet exceptional, but Chris was probably the only other tattoo artist I’ve met who was easy going, laid back, and had a care for what he was doing; kudos to that. Who’s the other one? Savio of course. But then, I haven’t given Eric a try either. Oh well, continuing on with the tattooing experience. 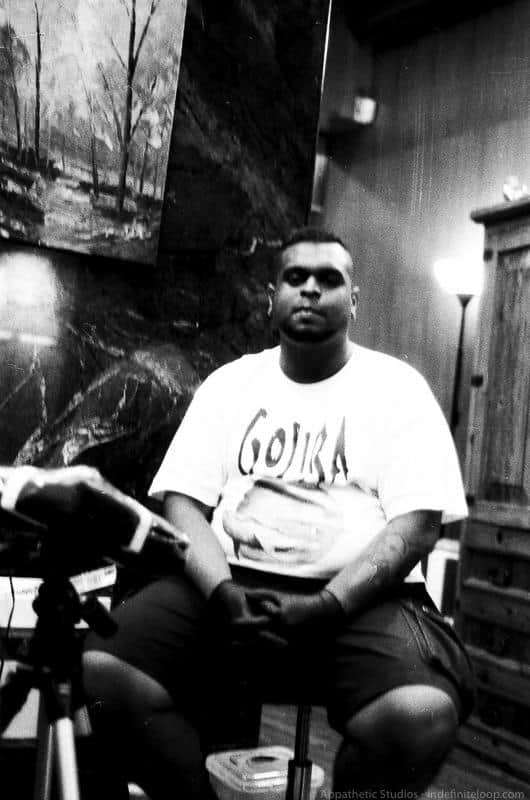 Chris wasn’t talkative much, at first. But a few smokes in, and he opened up quite a bit. We spoke about Singapore as a city, and some politics imbued there. I was also made aware about the circumstances around the Little India riot that took place, in 2013 I think. Another point of discussion was how the lower-local-strata of the population suffers the most, where the local economy is concerned; owning to the growing expat community here. I wasn’t much well informed about these points, so decided to stay mum at the time, and listen what he had to say. The tables had turned, I guess.

Chris is a great talker, and will willingly tell you about the haunts, jaunts, and the history of the city from a local’s perspective; all the while inking you. He’s a warm, big guy who loves what he does. And, it shows in his work. I love the tattoo, thanks Chris!

As for the tips part:

Singapore Travels: A Series Of Posts

There was just so much to do in Singapore, such wonderful experiences, and there’s just so much to write about, and recommend that I think it only makes sense to break it all into a series of posts. The next part of Singapore Travels series is coming soon.