Welcome to episode 3 of the People Talk podcast series. In this podcast I ask some questions about friendships, to my friends. Here's what they have to say, along with my views thrown in a post below.

We hold so much together with the word friendship. It holds us together. It does away with our sense of loneliness. Some friendships even hold countries together (Aristotle). It’s a bond, a virtue. It is something noble, something felt for someone, something reciprocated by someone. It’s a feeling. Many have tried to understand it, to decipher it, to grasp it. And, because loneliness exists, no man is an island.

“Let us now turn to Friendship and Enmity, and ask towards whom these feelings are entertained, and why. We will begin by defining and friendly feeling. We may describe friendly feeling towards any one as wishing for him what you believe to be good things, not for your own sake but for his, and being inclined, so far as you can, to bring these things about. A friend is one who feels thus and excites these feelings in return: those who think they feel thus towards each other think themselves friends…Those, then, are friends to whom the same things are good and evil; and those who are, moreover, friendly or unfriendly to the same people; for in that case they must have the same wishes, and thus by wishing for each other what they wish for themselves, they show themselves each other’s friends…” - Aristotle.

“There’s just the things you want, and the things the other person wants, and somewhere in between, the space where you meet…I guess in the end, we’re all of us just people putting Ikea furniture together…” - Hengtee Lim.

And, as luck would have it I ran across three blog posts that are about the topic, which I was so pondering about. One is by John, the other by Maria Popova, and the third from Hengtee Lim. The first two posts are on friendship. The third one is on Love, Sex, and Loneliness, and I think it does apply to friendships; to a certain extent. All these posts, they lead me to hunt down my friends, to ask them simple questions. One of those being What is friendship?

The collective answers that I heard from my own friends, and acquaintances became a short podcast episode; a podcast, and a post along with my thoughts on the subject.

Here’s a small podcast about friendships, and how my friends relate to the word friend. 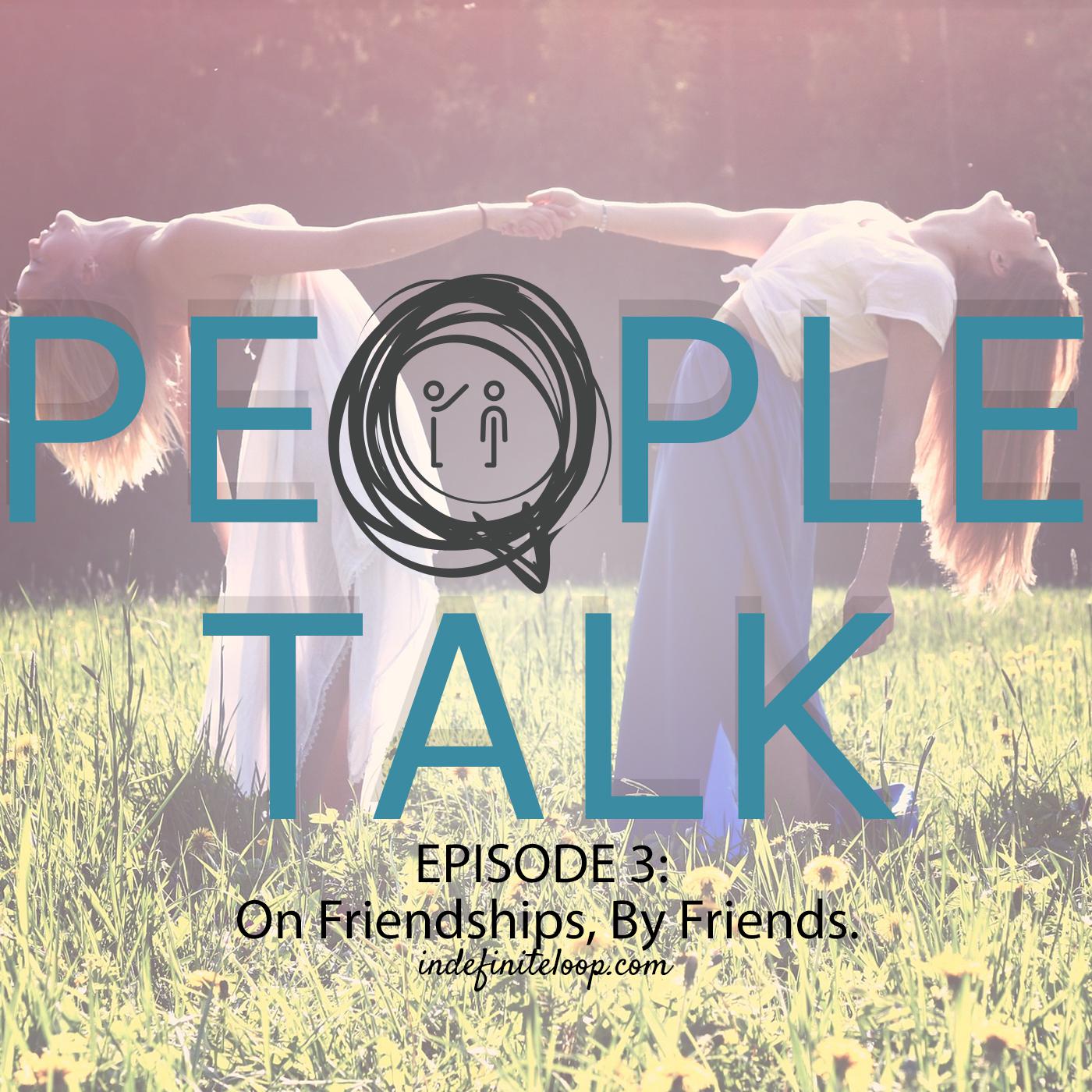 PS: Do note that there’s some noise in this podcast. As all the podcast in the People Talk series are recorded from an iPhone.

More About This Podcast

For quite sometime I’ve been wondering about what friendship means, as a word. And, as a label of a bond between two or more people. I’ve been asking myself questions like: what, and who a friend is? Whom would I call a friend or for that matter, how would I limit my relationships to just being acquaintances?

Until recently, before I came across the three blog posts about relationships, and friendships, I hadn’t thought of asking some of these questions to people I already call, and depend upon as friends today. Who better to ask them to, but friends?

It hit me while asking these questions that I should probably make this a podcast. To listen to the views, and answers from people whom I deem as friends. Gems all.

Do note, that today’s podcast starts midway. Because it was more of an impromptu call while being at dinner or meeting a friend for drinks at the local bar or after a yoga session. Also, note that I record all people talk podcasts on an iPhone. With no hardware or equipment available, so that does lead to some noise in the background, and other issues. I’ve tried to make the podcast as clear as possible, and tried to post-produce it to the best of my abilities. Hit play above, and let me know what you think?

A lot of people have said, written, researched, and thought about when it comes to friends, friendship, and the strength of ties; both psychologically, and philosophically. It’s been the topic of ponder for a long time, and it’s become one here too, for the questions that I harbor. And, for a podcast, and a post.

I am of the opinion that everyone has their own perceptions of both. That we all have our own definition of a “friend”, and “friendship”. And, that it makes sense then for us to be “friends” with people who define, and perceive those two terms as we ourselves do.

Further, I am of the opinion that most people don’t like change. They don’t like us changing around them. They’re willing to say goodbyes, when that happens. Some others want us to change, to better suit what they need from us. In which case, if we don’t change or conform, we hear goodbyes again; I know I’ve said my fair share of those, in both those situations. Losing a bond, it’s not the greatest of feelings; but it passes. You discover more about yourself, and who you are in the here, and now. Thus enabling you to form better bonds, and relationships going further.

As to whom I deem to be a friend?

More or less the definition keeps changing for me. It changes based on my past experiences with whom I called a “friend”, and my present experiences of friendship. I keep fine tuning it, so to speak.

Currently here’s my definition of / for a friend: Someone who’ll help pick up the pieces. Aid us back, for our aid. Pillars all, if I may go that far. Maybe someone to look up to; chase after, because we want to level with them. Someone we can compete with ( in morals, etc), and fight with; without the fear of loss. Someone whom we can be silent with. Someone whom we can message our “*I love you’s” at 2 AM in the morning, when we’re piss drunk. I also think that we are the collective sums of people around us. More so the sum of friends; both, the ones we’ve lost, and the ones we still call as friends.

…We value those who are liberal, brave, or just - Aristotle.

Someone who would add their value by being liberal, brave, and just. We value those who are liberal with their help — able to guide us, provide a sense of security for us, give as much of them as they can, while not harboring any other motives then that of fulfilling a friendship, and because of good or what we term as good. We value those who are brave enough to stand with us in our time of need, brave enough to brace our misfortune with us, brave enough to hold us with our shadows, and brave enough to be loyal knowing the darkness we bare. We value those who are just when they take from us, who are just in giving back the respect we give them, who are just when providing advice or help, who are just with their temptations with regard to how much should they take from us, who are just enough for/in critiquing us, and our actions. And so, to be valued as a friend we too have to provide; we too have to be willing to be liberal, brave, and just. I respect people who’re bare. Who’re open, and blunt. People who don’t hide their vulnerabilities knowing full well they may very well end up getting hurt. People who aren’t ashamed of being who they’re. People who aren’t afraid to adapt.

If you like where this podcast series is going, please do subscriber by clicking on one of the buttons below.