When Apple came out with their new product offerings this year, it was kinda a let down with regards removing some essential hardware, like the USB, in lieu of future proofing their products.  It’s great to have USB-C ports, but it does warrant at least one USB port to be present as an fall-back.

While the Touch Bar does seem like something of a step in the direction of creating the USS Enterprise, it does come at a price that not everyone can afford. The price just multiples if like me, you’re located elsewhere in the world where there levies put on imported products. The 13-inch Touch Bar variant costs about the same price as a used car. Food for throught that.

Being judgemnetal of Apple’s newly launched line, the cost of the products, and the kind of service offered here for Apple products, it’s only logical for someone like me, to find another product that still retains practicality, functionality, and some charms. I decided to head in the Linux console direction. More on that soon, in another post.

My last bout with Linux on a used HP laptop from Romania in 2007, was time consuming. Especially the part where I had to use NDISwrapper to make the wifi card play nice with Ubuntu. Recently so, I acquired a new-used laptop that runs Linux fabulously, and with pride. Trying out a couple of Linux flavor installs, I am convinced that Linux flavors, and drivers have matured enough to support most old-new hardware.

It’s been almost ten years since my last confession console. And, I needed to brush up on some commands, amongst brushing up on some other stuff. This led me to two cheat-sheets, one that was created way back in 1999, and the other is a PDF with more commands, and other things that require frequent reference to. The second manual was created long time ago too. For most part, both sheets are still relevant, and a good-handy reference for when needed.

The One Page Linux Manual

The sheet is very aptly titled. About all of the commands are still the same, and work like they’re supposed. Some commands may have been replaced by other flavor-specific commands, like commands to install, etc.

The One Page Linux Manual, is old. And, the creator’s website now redirects to an ISP’s website. It’s by [email protected]

I think this sheet is in need of an update, and if you happen to know of a never version, do drop me a line. If I remember to, and have the time to, I will update it.

This one’s full of commands, and other important information about directories, and files that are responsible for keeping your console going. Like the one above, the Linux Admin Quick Reference sheet is old, and the page it references cannot be found, even within the Internet Archive; and, the domain has been used for something entirely different. It’s made by Jialong He. 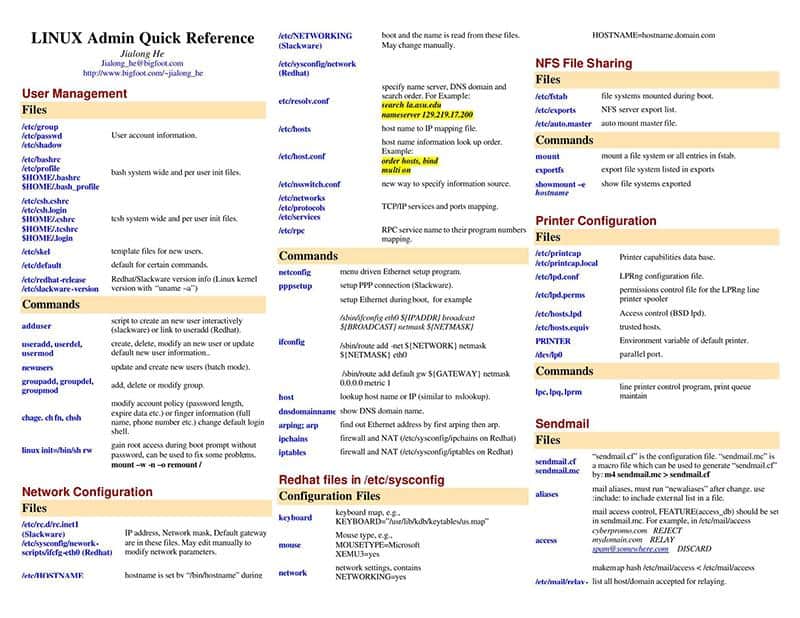 The quick reference is available as a PDF.